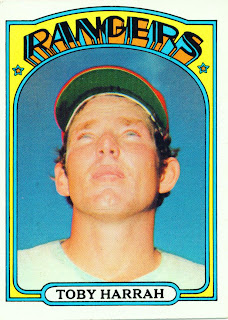 Yesterday was an off day for the Rangers. Tonight they are in Detroit to face the surging Tigers. Hopefully the guys can help out the Royals and get the Tigers stopped.

With no game to recap and no roster moves to talk about, I decided to return to 1972 for today's card. As I was looking at the cards, number 104 jumped out at me. Here we see a young Toby Harrah in the same odd angle photo that so many of his teammates fell victim to. What caught my attention is that, from this angle, Toby looks quite a bit like Ian Kinsler. At least to me he does.

Toby played shortstop for the Senators and Rangers in two stints. He came up with Washington in 1969 for a look and then in 1971 for good. He moved with the team and stayed with them until after the 1978 season. He was then traded to Cleveland for Buddy Bell. Before the 1984 season the Tribe dealt him to the Evil Empire. He played one season there and then the Rangers rescued him in a trade. Two seasons with Texas and then Toby hung it up.

Harrah was one of the players my grandfather talked about quite a bit as I was growing up. He was a pretty big star in the early years of the franchise and a lot of fans were glad to see him come home for his swan song.
Posted by Spiff at 11:12 AM