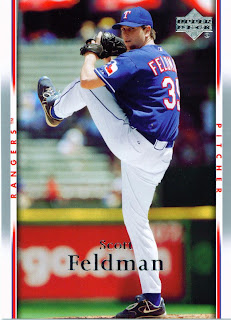 So Texas won on Saturday and again yesterday to get the sweep of the Angels. I was hoping for a win or two. I'll take the sweep though. Yesterday's win puts the Rangers 4.5 games up on the Halos.

There is a lot to talk about from the two games: Ian Kinsler's defense, Josh Hamilton's defense, John Lackey's insanity, the Rangers playing small ball when needed, the bullpen doing it in spite of Frank Francisco's absence.

The best note though was that the starting pitching held up. Scott Feldman, pictured here on card number 978 of the 2007 Upper Deck set, started yesterday's game. He went six scoreless innings before handing the ball over to Jason Jennings. Another nice outing from Scooter even though he got a no decision.

As noted above, Frank Francisco is out. The team placed him on the DL retroactive to the 7th. He will be available to come off on Friday. To replace him they called up Warner Madrigal. This is a real bummer since Frank was doing so well. I have no faith in Madrigal but at least the rest of the bullpen is among the most rested in the Majors.

Josh Hamilton left the game yesterday after his awesome leap into the wall catch to save at least one run. Word is that the problem was a groin muscle. He is claiming that he will be back tomorrow as the series in Detroit kicks off. If you haven't seen video of the catch you owe it to yourself to find it. Wow is the only description I can give.
Posted by Spiff at 11:02 AM

I am loving that Rangers defense. I am a bit torn as to who is the better team right now - the Jays or the Rangers!

It is a nice problem to have, and hopefully Hamilton gets back quickly.

Not the same guys every game but a mixture which is a sign of a good team. Just like the Rays of 2008 - the keep finding different ways to win. Have to keep it going though!