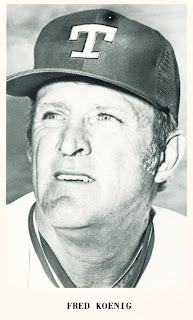 Texas lost last night in Detroit to snap their win streak. Dontrelle Willis pitched a great game and the Rangers came within one hit of being no-hit. That would have indeed been an embarrassing end to the streak.

With the loss I decided to take a look in my odd-ball binder for today's card. All of the cards in this binder are either over-sized or smaller than normal cards.

Found this 1978-79 Team Issue card of Fred Koenig. It is part of a lot that my wife picked up for me because it included the Jon Matlack. The cards are about the size of postcards and have no numbering or information on the back.

I really couldn't recall ever even hearing about Fred Koenig so I had to turn to the Internet for information. It seems that Koenig never made it to the majors as a player. His highest level of play was Triple A. The last season he played was in 1963.

Following that, Fred turned to coaching. He managed in the minors for the Cardinals and Angels. The Halos eventually named him as a Major League coach for 1970 and 1971. After the manager was fired, so was Fred. He then went back to the Cardinals as a minor league manager and director of player development.

It was back to the Bigs in 1976 as a coach with the Cards. From 1977 to 1982 Koenig coached with the Rangers. After that he spent a season each with the Cubs and Indians. He finished up after working in the minors for the Braves.
Posted by Spiff at 10:49 AM