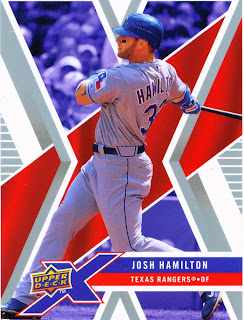 Josh Hamilton, seen here on card number 95 of the 2008 Upper Deck X set, returned to the Rangers' lineup last night. While he wasn't the on base machine that Michael Young was, he still launched a two run homer. Nice way to announce his recovery after being on the DL.

Michael Young was also back after sitting out a few days with a sore back. He celebrated by going 3 for 3 with a pair of walks thrown in to make things interesting. Chris Davis also went yard with a solo shot. Kinsler, Byrd, and Salty all doubled.

On the defensive side of things Jarrod Saltalamacchia caught Ichiro Suzuki stealing. Elvis Andrus made a phenomenal catch on a sinking line drive to possibly save a run. Good to see plays like that.

While all of that was going on, Scott Feldman went 6.1 innings and allowed the Mariners just one run. Derek Holland came on in relief and went 1.2 scoreless innings and Eddie Guardado tossed a scoreless ninth to end the game. I am getting spoiled talking about the good pitching the Rangers have been getting. I could get used to it though. Is this how Boston fans feel all the time?

Final was 7-1, Rangers over Mariners. Thanks to Boston's comeback victory in Anaheim, this gives Texas a 1.5 game lead over the Angels. It would be nice to see them pick up another game or two before the Halos come to town on Friday. Still a wide open race but at least the Angels aren't just walking away with the division the way they did last year.
Posted by Spiff at 1:36 PM

And isn't it great to have him back! Easily one of my favorite players. Whenever he is up to bat, I drop everything and watch him. Looks like the team is starting to click and playing some nice baseball.