Triple play is not enough. 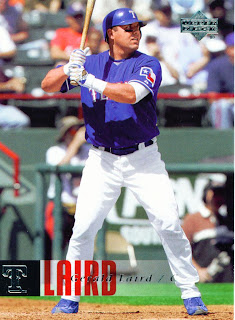 The Rangers need to get out of Detroit as fast as an auto manufacturer. Two straight losses this series. They are looking at a second sweep there this season if they can't win this afternoon. I don't know what it is about Motown but things just aren't going well there this season for Texas.

One bright spot of last night's loss was provided by former Ranger Gerald Laird, seen here on card number 836 of the 2006 Upper Deck set. Gerald did the team a favor and hit into a triple play to help pitcher Matt Harrison out of a jam. It wouldn't be enough though as the Rangers fell 5-3.

One last game in Detroit this afternoon and then it's back to Texas for a weekend series with the Astros in Houston. The 'Stros are 18-20 on the season so there is a chance the guys could have a good series there. Texas needs to use that series to pick up momentum as they head into a midweek face down with the Evil Empire.
Posted by Spiff at 11:01 AM