Davis gets out the broom. 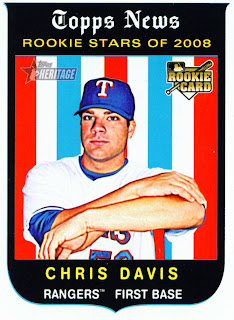 Texas managed another walk-off win yesterday to stay 1.5 games ahead of the Angels. The hero was Chris Davis, seen here on his 2008 Topps Heritage card, number 671.

Chris crushed a two run homer in the bottom of the ninth inning to give the Rangers a come from behind 3-2 win over the Mariners. That completed the three game sweep. This was Davis' 10th long ball this season and his first walk off homer. He had been really struggling at the plate recently and it is nice to see him come through in the clutch.

Chris wasn't the only well-performing Ranger. Pitcher Matt Harrison had his scoreless innings streak snapped at 22 innings when he gave up two runs in the fourth. He steadied though and came back to shut the Mariners out for the rest of the game. Great performance.

Getting a complete game from a starter headed into a series with the Angels gives the Rangers a jump coming out of the gate. While the Texas bullpen rested up, the Angels took 12 innings to win and used five relievers. That combined with the travel and the home field advantage could work to Texas' benefit. If the Rangers win just one game of the next three they will still be a half a game ahead of the Angels. If they can win two they will move to 2.5 games ahead. I like that option better. A three game sweep seems too much to hope for but they have to beat the Halos head-to-head in order to be considered legitimate contenders.
Posted by Spiff at 11:04 AM