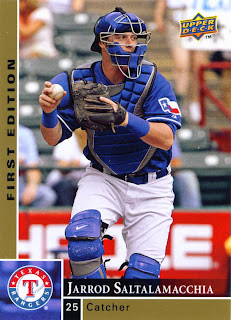 Received a small package of cards today from Charles over at Blue Jays Cards. Charles had contacted me a little while back and asked about a trade. Following some easy negotiations we agreed on a trade and I sent some Jays on their migration North.

In return I received a nice group of 12 or so Rangers cards, several of which I did not have. One such card was this 2009 Upper Deck First Edition Jarrod Saltalamacchia, number 288 in the set. A nice looking card with Jarrod in his "Pudge stuff." Out of curiosity I read the back of the card. It talks about Salty's first career grand slam in 2008. A good card to be getting the day after his second career grand slam.

Along with Salty, there were several other First Edition, a regular 2009 Upper Deck, and a 2006 Fleer Ultra card that I needed. The cards were well packaged and arrived safely. If you ever get the chance to trade with Charles, I encourage you to do so.
Posted by Spiff at 11:59 AM

Glad you enjoyed them and I am already setting a side round two.

I think Jarrod Saltalamacchia has the best name in baseball if not one of the best names in all of sport today.

Certainly the longest, if not the best name.

Very nice card of Salty...might have to reference for a sketch card. Long time (since the Jim Kern days)Ranger fan. Great sight.

Thanks for the comment and for checking my blog out. Hope you continue to enjoy it.