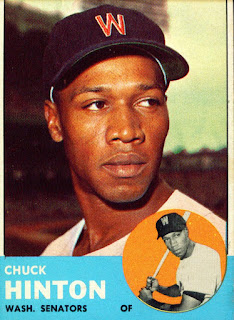 Chuck Hinton, shown here on card number 330 of the 1963 Topps set, was coming off a stellar 1962 season. In 1963 he would see his numbers drop significantly but still remain respectable.

Chuck appeared in 150 games in 1963, more than any other Senator. He would also lead the team in plate appearances with 646. Unfortunately for the team, his .269 batting average was also a team best as was his .340 on-base percentage. A speed merchant, Hinton also led the team in triples with 12 and stolen bases with 25. Those numbers contributed to his team-leading 80 runs scored.

On defense Hinton was again a jack of all trades. In fact, he played in six positions total throughout the season - one more than he had appeared in in 1962. Most prominent was left field where Chuck logged 679.1 innings and tallied a .987 fielding percentage - eleven points higher than the league average. In 363.1 innings in right field his .991 fielding percentage was also eleven points above average. The next most common place to see Chuck with a glove on was third base where he put in 172 innings but fell well below the league average fielding percentage at .860. 54 innings at first base, 47 in center field, and three at shortstop all resulted in flawless defensive performances.

1963 had been a drop off for Hinton but he was still at the top of the Senators roster. A versatile player with speed and a pretty good glove he was definitely an asset and looked to be back with the team in 1964.
Posted by Spiff at 12:35 PM