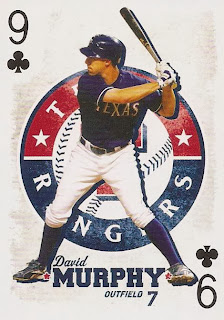 Well, there hasn't been much going on for the past couple of days. At least for the Rangers. Work for me has been another matter and that's my weak excuse for the lack of posts. Work got in the way of blogging. Anyway, despite the lack of any big news there has been a few things going on here and there.

Texas did sign utility infielder Adam Rosales to a one-year deal on the 14th. You may remember Rosales as the player who went back and forth between Texas and Oakland several times in the last part of last season. The move provides some cheap backup if it's needed.

The Rangers still seem to be pursuing Brian McCann. I guess the thinking is he could play at first and catcher and DH. Not sure I like the idea of signing him to a long-term contract but it's looking like Texas is serious.

Apparently Texas may or may not be serious about dealing either Ian Kinsler, Jurickson Profar, or Elvis Andrus. There are some rumblings the mention of their availability may be a message to Kinsler that he needs to consider a move to either the outfield or first base. Of course, if he doesn't mind changing teams, the message probably won't get through.

MLB.com's Hot Stove blog is reporting the Padres are interested in acquiring a left-handed bat to help them against right-handed pitching. A trade is the preferred method but David Murphy, shown here on an Academy Sports playing card, is also on the radar. Murph's disappointing season last year might parlay into a lower contract. That could help the Padres get in with their limited budget. Also, if Murphy takes a shorter contract he could try to get his bat on track before free agency hits again. That might be a better option for him than a long-term fire sale contract.
Posted by Spiff at 12:12 PM