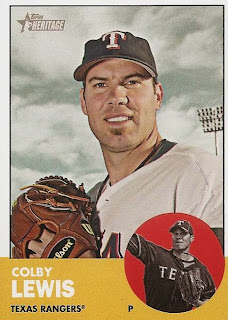 Rangers General Manger Jon Daniels talked with the media yesterday. That gave a window into how the off-season is going. The window wasn't entirely clear though, in typical Daniels fashion. After all, you don't want to tip your hand to other teams.

Apparently the Rangers have received some inquiries as to the availability of Mitch Moreland. According to Daniels, the calls have been based on teams viewing Moreland as a "buy low" player. Can't tell if that's just Daniels' assessment of their reasoning or if he views Moreland as on the verge of breaking out.

The Rangers are expecting Nelson Cruz to reject the one-year offer they made to him. They are in touch with his agent and have not ruled out the possibility of re-signing him after the rejection.

Texas also made an offer to pitcher Colby Lewis, shown here on card 403 of the 2012 Topps Heritage set. Lewis missed the 2013 season rehabbing from Tommy John surgery but the Rangers still like him and would like to see him back in 2014. No word yet on his intentions or details on the offer.

The main reason for the news conference where Daniels was talking to the media was to announce the long-term deal the Rangers inked with pitcher Martin Perez. The deal appears to be modeled on the one they signed with Derek Holland a year or two ago. The deal locks Perez in for four years with club options for 2018 - 2020. That knocks out Perez's arbitration years and gives Texas an out if he doesn't develop like projected. The initial contract calls for $12.5 million over four years. If he can turn in performances anywhere near his 2013 season, Perez should be well worth the investment.
Posted by Spiff at 12:08 PM