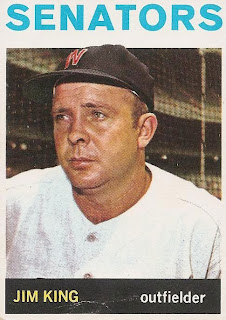 Coming off his 1963 season, Jim King, shown here on card 217 of the 1964 Topps set, had two main goals: to up his on-base percentage and batting average.

King would continue to serve as the Senators starting right fielder in 1964. He spent 955 innings in right over 121 games and didn't play any other position in the field. He made seven errors for a .973 fielding percentage. That was a pretty significant drop from his fielding percentage the year before and well below the league average .980.

Jim made 478 trips to the plate on offense throughout the season. He managed a .241 batting average - ten points higher than the previous season. He used his 55 walks (ten more than in 1963) to run his on-base percentage up to a little to .335. Only five points higher than the year before but still an improvement. Disturbingly, King's power lessened as his slugging percentage dropped 32 points to .412. His 15 doubles and 18 home runs indicated he could still thump the ball, but just not as often.

Overall Jim King had an acceptable year in 1964. His lessening power and trouble on defense were concerns that he needed to address if he wanted to keep his starting job. However, he had paid off well for a player plucked from the minors during the expansion draft just a couple of years before.
Posted by Spiff at 12:10 PM