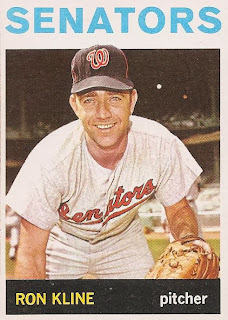 In 81.1 innings pitched Ron posted a 2.32 ERA and a 1.254 WHIP. That ERA was low enough to be the team leader and the WHIP was the second best coming out of the pen.

While Ron Kline was not an All-Star reliever, he was a breath of fresh air for the pitching-starved Senators. His consistent performance out of the pen was a relief. The money spent to purchase his contract from the Tigers in 1963 appeared to be money well spent. Ron had a slot in the pen for 1965, he just needed to take advantage of it and keep working improve his performance.
Posted by Spiff at 12:41 PM