The Off-Season Shuffle Picks Up. 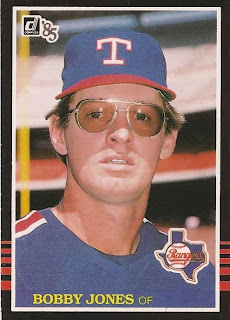 Well, the off-season moves have begun in earnest for the Rangers. Staff and roster moves for now but the trades and signings will be coming.

Closer Joe Nathan voided his one year option on the first. Texas had picked up their end of the deal but Nathan saw enough action in 2013 that he had the right to void it. He's looking for a multi-year deal and the Rangers are hesitant to give a 39-year-old pitcher with a recent history or arm problems that kind of contract. If they had been able to retain him there is a decent chance they might have shopped him around anyway. Look for Feliz and Soria to get a shot at the closer's role. Look for the Angels to talk to Nathan.

On the same day Nathan left, former Ranger Bobby Jones arrived. Jones, shown here on card 134 of the 1985 Donruss set, was moved up from the Triple A manager's spot to coach with the Big Club. Not sure if he will be the bench coach or first base coach. The Rangers still need one more coach to fill out their staff. Double A manager Steve Buechele will likely replace Jones at Round Rock.

Yesterday the Rangers announced Martin Perez was the team's Rookie of the Year. He certainly had a strong rookie season and provided a lot of excitement for the future.

Also yesterday the Rangers made Nelson Cruz an offer for $14.1 million. He's got until Monday to make a decision. Don't expect an acceptance since he's looking for a multi-year deal. What will be interesting to see is if his PED suspension hurts his chances at landing a lucrative contract. At least the Rangers look to get a compensatory draft pick if he leaves since the offer they made qualifies.
Posted by Spiff at 11:50 AM

I think the Rangers caught Nathan at the right time to get the type of year he had. I don't know if he can repeat that success at his age, but I sure did like him.