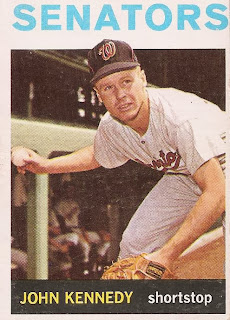 Kennedy finally stuck with the team in 1964. He played mostly at third, in spite of what his card lists, but did put in time at short. He even had a cameo or two at second.

John put in 758.1 innings at third base over 106 games. He committed 18 errors though for a .941 fielding percentage. That was well below the league average .955. Things were a little better at short where he posted a .966 fielding percentage over 372 innings in 49 games as a result of seven errors. That was just two points under the league average .968. He briefly appeared at second with nine innings in two games. He had no errors there.

Kennedy made 521 trips to the plate on offense. He walked 29 times. That combined with his .230 batting average gave him a .280 on-base percentage. He also had no speed as he stole just three bases while getting caught three times. His power was also practically non-existent with a .324 slugging percentage as the result of just seven home runs, four triples, and 16 doubles. Those offensive numbers were in Ed Brinkman territory.

John Kennedy finally got his shot at the Big Show in 1964. Unfortunately he didn't manage to capitalize on it. When the Dodgers and Senators started talking, John's name was in the mix. He ended up going to Los Angeles in the Frank Howard deal when the Dodgers agreed to included third baseman Ken McMullen. With a new face at third, Washington decided they could let John Kennedy go.
Posted by Spiff at 10:40 AM

Hmm... THIS John Kennedy BEGAN his career in Washington DC, and ENDED it in Boston.