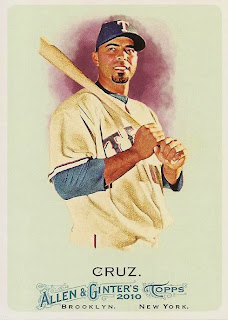 Nelson Cruz, shown here on card 133 of the 2010 Allen and Ginter set, turned down the Rangers one-year offer yesterday. That wasn't unexpected and insures Texas will receive a compensatory draft pick if Cruz signs elsewhere.


Cruz is considered a top-tier free agent. The only other outfielders in that group are Jacoby Ellsbury, Carlos Beltran, Shin-Soo Choo, Curtis Granderson, and Marlon Byrd. If the Rangers can't retain Cruz, they might make a run at one of the others in the group. Ellsbury is the only one who really stands out to me as a possibly good signing. Choo and Byrd have defensive limitations. Beltran and Granderson are aging.

As much as I doubt Cruz and his slowly declining defense, it looks like keeping him might be the Rangers best option. The team needs to upgrade its offensive capability. Obviously Cruz wouldn't be an upgrade over himself but keeping him would allow the club to upgrade in another area.
Posted by Spiff at 11:28 AM