Vealtones in the mail. 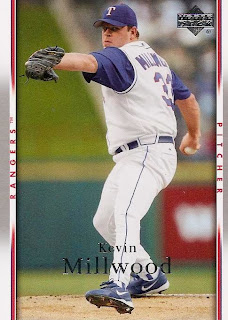 More rumors out there. This time Texas is looking to sign Shin-Soo Choo and passing on Jacoby Ellsbury. Supposedly the team likes Leonys Martin enough to pass on Ellsbury. Can never have too much speed I say.

Something that is no longer a rumor is a trade I recently made with Dustin over at Coot Veal and the Vealtones. Dustin cleverly insured he would send first by neglecting to provide me with his address. I got my part of the trade on Saturday and will be sending today or tomorrow.

The trade came about as the result of an earlier post looking to add to my Rangers game-used and autograph collection. Dustin was able to come through for me in a big way with seven game-used and three certified autograph cards. If that wasn't enough, he also tossed in a slew of other cards I needed. One of the additional cards was this 2007 Upper Deck card of Kevin Millwood. It's card 231 in the set and completes my 2007 Upper Deck team set.

Wow, thanks for the kind words. Glad I could finish off a team set, too.

Thank you for the trade. Hope you enjoy your end as much as I am mine.