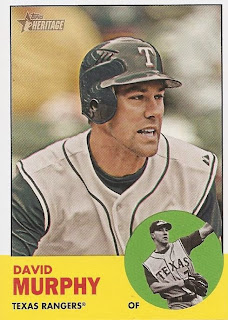 MLB.com is reporting today that David Murphy, shown here on card 272 of the 2012 Topps Heritage set, has signed a two year deal with the Cleveland Indians. The contract is worth $12 million over the two years and includes a club option for 2016. The Indians expect Murphy to take over the starting right fielder's job.

This really isn't surprising news. Texas didn't make an effort to re-sign Murph after his let-down performance last season. Couple that with the chance Cleveland is giving him to play every day and it is unlikely the Rangers could have kept him even had they wanted to.

I always liked Murphy and felt he was an underrated piece of the Rangers World Series teams. Watching him struggle last season was painful. Hopefully the change of scenery will jolt him back to his usual level of play. Against every team except the Rangers of course.

Also in the headlines are continued rumors concerning Texas' middle infield trio. Supposedly the team has been hearing from clubs interested in one of the three but there hasn't been any serious discussion yet. Not word on which player is the most sought after. Hopefully the team gets some real value if they trade any of the three.

Just a quick programing note. This week is extremely busy for me. That means my posting may be a little lacking (like yesterday). I'm going to try to keep up but there may be a day or two more before next week that I miss.
Posted by Spiff at 12:09 PM