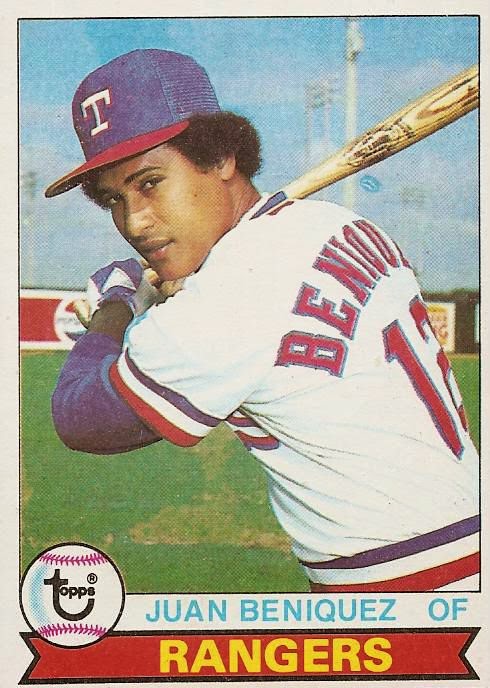 Continuing the turnover theme from last week, we have Juan Beniquez on card 478 of the 1979 Topps set. Juan was long gone by the time this card hit the shelves.

Beniquez had been with Texas for three seasons from 1976 to 1978. Part of one of the best teams in club history, he lasted through the first season of turnover. On November 10, 1978 the Rangers traded Beniquez, Paul Mirabella, and three minor leaguers to the Yankees. In return Texas got Mike Heath, Sparky Lyle, Larry McCall, Dave Rajsich, Domingo Ramos, and some cash.

Not too bad a trade on the face of it until you consider the minor leaguers the Rangers threw in. Greg Jemison never made it out of the minors and Mike Griffin was never an ace for any of the teams he played for. The third player had success though and you've probably heard of him, a young pitcher by the name of Dave Righetti. Definitely makes the trade more one-sided than at first glance.
Posted by Spiff at 11:36 AM