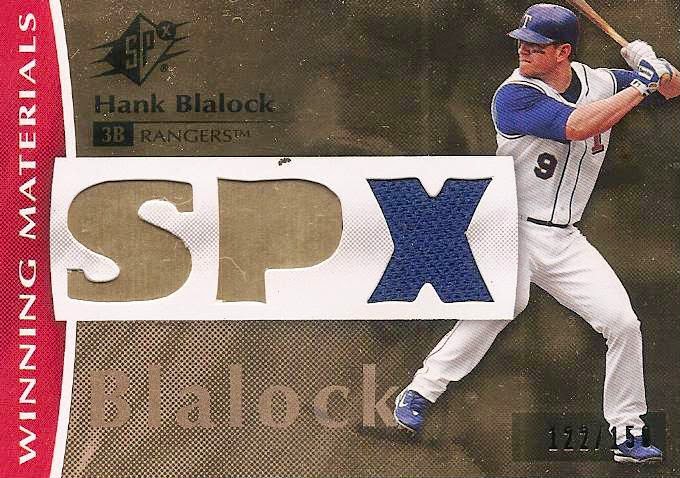 Last week was hectic, to say the least. You probably figured that from the lack of posts during that time period. I meant to post but it seemed I never had time. Between lawn care, baseball practice, a kiddo's birthday party, dinner guests, and schedule changes at work due to classes; things got jammed up.

In the middle of all the confusion I found a bubble mailer sitting on the dining room table one day about mid-week. Mrs Spiff told me it came that day and asked what I was expecting. Nothing. No pending trades or recent purchases.

The return address indicated the mailer was from Scott over at Bob Walk the Plank. Inside were several cards and a note from Scott saying he thought I might like them. The pictured 2008 SPx Winning Materials Hank Blalock card was one of the cards in the mailer. It's numbered 122/150 and features a dark blue uniform piece. Also included in the mailer were a second game-used card and three certified Rangers autographs. Wow! Thought I might like them? Of course I do. It was an awesome surprise package and I appreciate it more than I can say.

Of course, I would be low on cool Pirates stuff right now. I've been pondering how to respond and haven't yet come up with anything that seems to be close to appropriate. One thing I can do is say a public and very heartfelt thank you to Scott. You really made my week man and I can't say thanks enough.
Posted by Spiff at 10:23 AM

Glad you liked them! I had a ton of Rangers cards in my trade bait. Send you and Play at the Plate cards at about the same time.