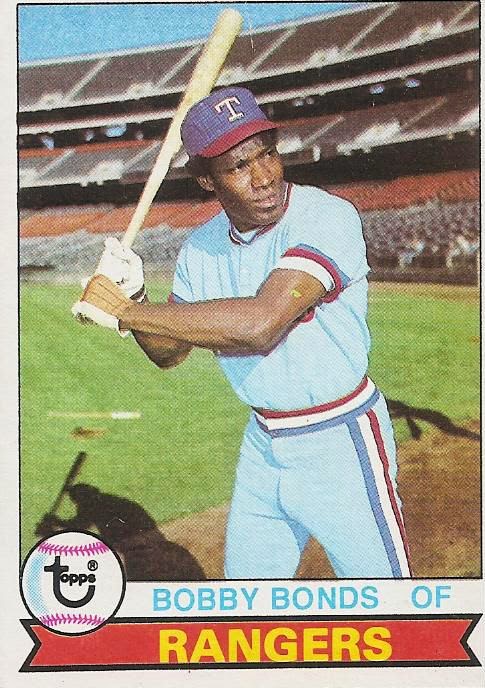 Bobby Bonds, shown here on card 285 of the 1979 Topps set, was one of the players who came through Arlington on the late 1970's roster merry-go-round. By the time this card came out he was already gone.

The Rangers traded Claudell Washington and Rusty Torres to the White Sox for Bonds on May 16, 1978. Bonds was a veteran player with a reputation for power, speed, and surliness. Texas hoped the first two characteristics would over shadow the third.

It didn't take Bobby long to nail down the right field spot. He would play 971.1 innings in right over 111 games. He committed seven errors to end the season with a .970 fielding percentage. That was below the league average but Bonds made up for it with his bat.

In his 555 plate appearances over 130 games Bobby compiled a .265 batting average and a .356 on-base percentage. He walked 69 times and struck out 110 times. Of course Bonds also hit 15 doubles, four triples, and a team best 29 home runs. Those combined to give him a team high .497 slugging percentage. Bobby's speed wasn't entirely dried up even though he was slowing. He got caught stealing a team high 20 times but also stole 37 bases - second best on the club.

Over all Bobby Bonds was one of those mid-season acquisitions that work out well. However, his skills were gradually eroding and he only had a few more years left in him. Texas decided to use Bonds' 1978 performance to flip him. On October 3, 1978 the Rangers send Bonds and Len Barker to the Cleveland Indians for Larvell Blanks and Jim Kern.
Posted by Spiff at 11:02 AM