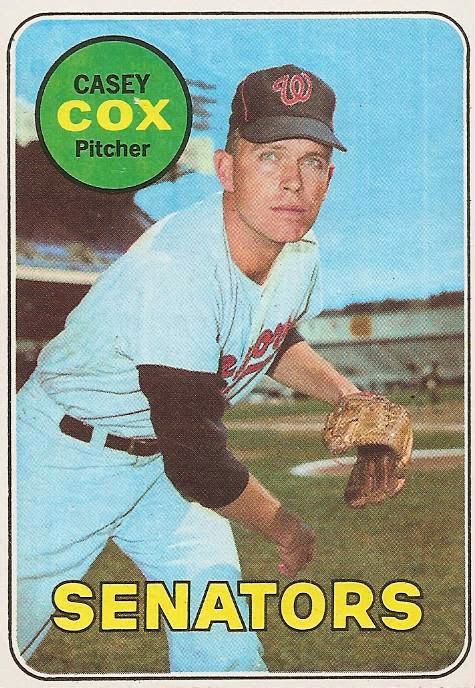 1969 would be a transition year for Casey Cox, shown here on card 383 of the 1969 Topps set. Up until 1969 Casey had been a reliever. He hadn't made a Major League start in any of the three seasons he appeared in prior. That would change in 1969.

Moving from the role of full-time reliever to swingman, Cox appeared in 52 games for the Senators in 1969. 11 of those appearances were starts. Casey pitched 171.2 innings and posted a decent 2.78 ERA. He struck out 73 but also walked 64. Those walks contributed to his 1.311 WHIP. Cox ended the season with a 12-7 record.

Perhaps more important for Casey Cox than any stats was the fact that he spent the entire season with the Senators. That was a nice change after being at Triple A for part of 1967 and most of 1968. He had seen more action in 1969 than in any of the three previous seasons and ended well. Apparently Casey Cox had found a spot on the pitching staff as a swingman. It was a role he would look to get nailed down in the coming seasons.
Posted by Spiff at 10:07 AM