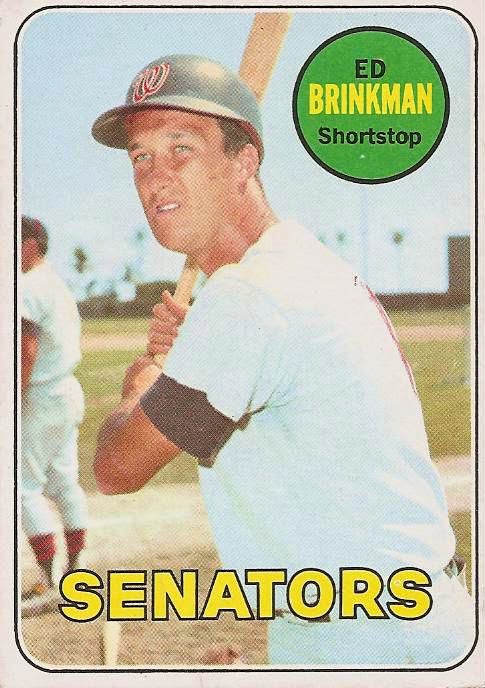 Perhaps it is fitting that Ed Brinkman appears with a bat on card 153 of the 1969 Topps set. Brinkman was a slick glove no-bat shortstop for most of his time with Washington. 1969 would be the exception.

After losing playing time in 1967 and 1968, it was back in the saddle again for Ed Brinkman in 1969. He would appear in 151 games for Washington, 150 of them at shortstop and one as a pinch-hitter. Back in the role of starting shortstop, Brinkman played 1306.1 innings and committed 19 errors for a fielding percentage of .976, ten points higher than the league average. That's even more impressive in light of the fact that Ed had significantly more range than most American League shortstops.

Brinkman had traditionally been a black hole in the lineup. He struggled to bat even .200 and had never posted a season average over .230. That would change in 1969. Manager Ted Williams was a disaster for the club and probably about the worst manager in franchise history. He did know hitting though and seemed to take a liking to Brinkman. Well, as much a liking as Ted ever took to anyone. Williams made Brinkman his personal project and the results showed.

In 639 plate appearances Brinkman posted a career best .266 batting average (79 points higher than the previous season). His on-base percentage jumped 69 points to .328 and his slugging percentage soared 123 points to .325. Most of that slugging percentage came from Ed's 18 doubles but he also slipped in five triples and two home runs. He struck out 42 times but also walked 50 times - the most in a season to that point in his career.

Still not a tremendous threat at the plate, Ed Brinkman had made huge strides in his offensive game. It was noticed by those outside Washington, he got a little MVP consideration. Perhaps Ed's bat development was timely. The Senators tried out several possible replacements for him over the years but none seemed to stick. In 1969 they called up a young Toby Harrah for a cup of coffee. Harrah looked promising. Brinkman needed to keep improving with the lumber if he wanted to retain his job.
Posted by Spiff at 12:22 PM