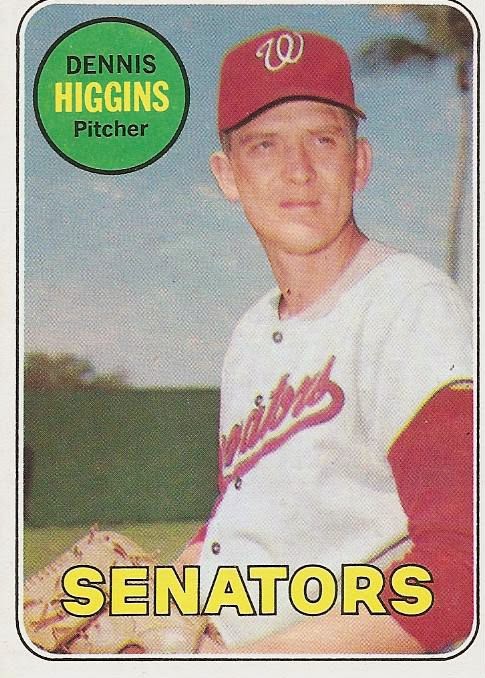 Dennis Higgins, shown here on card 441 of the 1969 Topps set, is modeling the new look the Senators went to in the late 60's. All that red reminds me of the mid 90's Rangers look. Just as a side note, my copy of this card is not as off-center as the scan appears. It actually has the top border but the scanner kept cutting it off.

1969 was Higgins' second season with Washington. He had been the most used reliever for the club in 1968 and was the second most used in 1969. He came in second to Casey Cox, who also made some starts, so Dennis might be considered the most used Senators reliever.

Over 55 appearances Higgins pitched a total of 85.1 innings. He compiled a 3.48 ERA and an 1.582 WHIP. Primarily a late-inning reliever, Dennis finished 35 of the games he appeared in and ended up with 16 saves - most on the club.

1969 hadn't been a bad season for Dennis Higgins but it wasn't a great one either. His ERA and WHIP had edged up and that was a bad sign. Apparently the team decided to flip Dennis before his stats moved too far in the wrong direction. On December 5, 1969 Washington sent Higgins and Barry Moore to the Cleveland Indians in exchange for Ron Law, Dave Nelson, and Horacio Pina.
Posted by Spiff at 10:30 AM