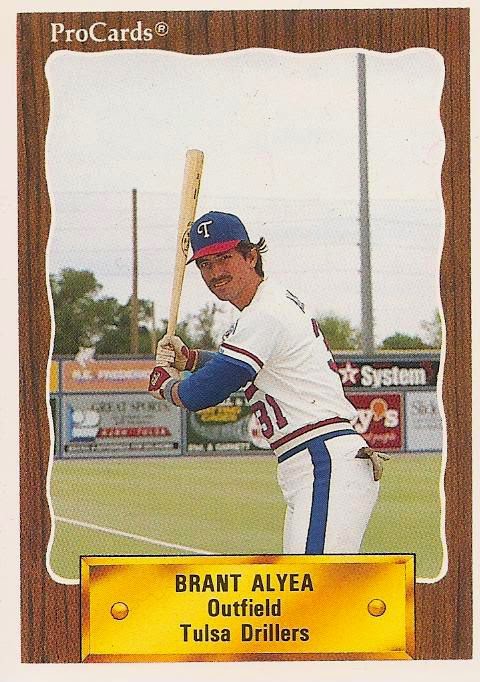 Alyea started his career in the Toronto Blue Jays organization in 1985. The Jays let him go after the 1986 season and he played in 1987 with the independent Single A Miami Marlins. Texas picked him up for the 1988 season but he ended that season in the New York Mets organization before being released there as well. The Rangers re-signed him in 1989 and assigned him to Single A Port Charlotte. He struggled there failing to bat even .200 in 23 games. Nevertheless, Brant was assigned to Double A Tulsa for 1990.

Alyea's 1990 season is somewhat of a mystery. Baseball-reference indicates their records for him are incomplete for that season. What they do have shows that Brant played in six games for Tulsa and made 20 plate appearances. His batting average and on-base percentage were an identical .150. He hit just two doubles. No defensive information is provided.

It's impossible to tell at this late date if Alyea's struggles were injury related or if he just couldn't get his bat going. What's plain to see is that he didn't finish the season with Tulsa. I suspect Texas released him. From Tulsa he moved to the independent triple A Tabasco Olmecas of the Mexican League. There are no stats provided for Brant's stay in Mexico and his career playing records end after the 1990 season.
Posted by Spiff at 10:23 PM