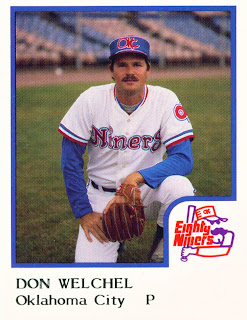 Texas lost last night to the Twins 5-3. Josh Hamilton was responsible for all of the Rangers' RBI. Spiff Jr. was at the ballgame with Grandpa and called this morning to tell me that Hamilton's home run "went a long way." Fortunantly the Angels also lost so Texas is still only two games out of first. Other than that the main news seems to be that David Murphy has been taking some infield practice at first base. Apparently he is an emergency back-up.

With the slow day it seemed like an opportune time to take a look at a minor league card and play "Whatever happened to that guy?" Today's subject comes to us from the 1986 ProCards Eighty Niners team set. Pitcher Don Welchel.

Don played one year in the Rangers' organization. In 1986 he started 25 games and went 12-9 on the year while posting a 3.99 ERA. He never got the call with Texas and went to the Royals for two years in the minors before the end of his career.

Don did play in the majors though, for Baltimore in 1982 and 1983. He appeared in a total of 13 games in those two seasons, all in relief. His career Major League ERA stands at 5.81 in 31 innings pitched. Perhaps Kevin over at Orioles Card "O" the Day has some more information on Don's time with Baltimore.

All told Welchel put in part or all of eleven seasons in the minors between 1978 and 1988. During that time he spent parts of two seasons in the Bigs. A lot of work for a couple of cameo appearances. I wonder if Don ever regretted hanging on as long as he did.
Posted by Spiff at 5:46 PM

Don looks more like a math teacher than a major leaguer.

Yeah, he kind of does. So did Greg Maddux though so I guess you never can tell.