Rangers go for sweep against Boston. 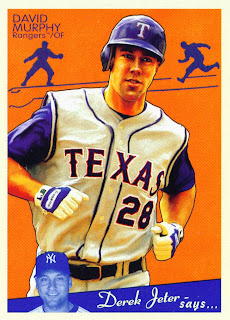 Quick post tonight. Trying to get ready to be off to see two Rangers/Royals games this weekend. That will probably put a hold on any further posts until Monday.

In spite of being hammered by the flu. the Rangers haven't slowed down. They are currently leading the Red Sox 3-1 in the bottom of the fifth inning and have already knocked Clay Buchholz out of the game.

David Murphy, shown here on card number 188 of the 2008 Goudey set, has done his part to keep the train moving. He is currently sitting on 2-for-3 in the game with a run scored and a stolen base.

Speaking of stolen bases, so far the guys are robbing Jason Veritek blind. They have five steals in the game. Unreal. Hopefully the last few innings go as well as the first part of the game has.
Posted by Spiff at 9:01 PM

Get out your broom! We needed that...and by we, I mean the Rangers...Way to go Rangers.

Nothing gives me greater pleasure than us defeating the Sox. Great wins guys! You played exceptionally well. Now let's keep producing this type of baseball every night.

I agree, the Sox series was great. If they can keep this up the guys may just still be playing in October.