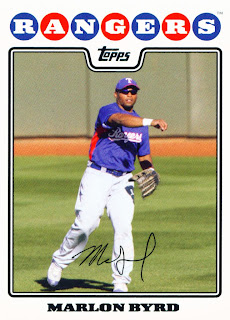 Had a good trip to Kansas City this past weekend to see the Rangers come to town.

In Friday's game we watched as Scott Feldman tossed eight shutout innings, his longest outing of the season. C.J. Wilson came on in the ninth to keep the Royals handcuffed and save the shutout. Marlon Byrd, shown here on card number TEX8 of the 2008 Topps Texas Rangers set, knocked a home run in the fourth inning to tag Zack Grienke with the loss. It was Zack's sixth loss of the season. The guys managed to add an insurance run in the eighth off the Royals' bullpen to make the final 2-0.

Saturday's game started off well as the Rangers scored in the first, third, and fourth to make it 3-0 Texas. The Royals came back in the fourth to score a run. In the fifth though Derek Holland suffered his now traditional meltdown and allowed three runs to give up the lead. That was enough to sink Texas but KC added two more off of Jennings in the seventh. Holland is now 3-6 on the season with a 6.13 ERA. Perhaps a trip back to the minors to learn how to avoid the meltdown inning could be in order.

All in all a good weekend. Nice weather, the refurbished Kauffman Stadium is much better than last year, and Spiff Jr. scored a Josh Hamilton autograph on Saturday. Didn't manage to pull off a meeting with Micah over at Baseball is my Boyfriend, perhaps another time when the Rangers are at The K. At least with the win last night though the Rangers took the series from KC and made their trip to KC as enjoyable as mine.
Posted by Spiff at 10:22 AM

Any trip with a Hamilton autograph is money!