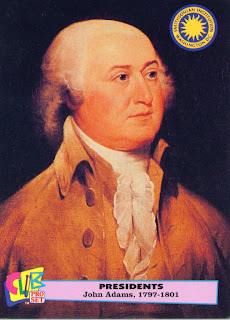 John Adams was a signer of the Declaration of Independence, second President of the United States, and filled numerous other roles of service to the country from before the Revolution to his death. He died on July 4, 1826.

Adams was a prolific writer and speaker. His thoughts may apply to us even today. He seemed to know what his job was: "I must study politics and war that my sons may have liberty to study mathematics and philosophy."

Adams had a warning for future generations though: "Liberty cannot be preserved without general knowledge among the people."

What general knowledge? Well, he seemed to have two things in mind: "Our Constitution was made only for a moral and religious people. It is wholly inadequate to the government of any other." Additionally: "Children should be educated and instructed in the principles of freedom." Sound advice.

John Adams wasn't so busy that he couldn't cut loose on occasion. He wrote to his wife what he envisioned Independence Day celebrations to be like. He said, "I am apt to believe that it will be celebrated by succeeding generations as the great anniversary festival. It ought to be commemorated as the day of deliverance, by solemn acts of devotion to God Almighty. It ought to be solemnized with pomp and parade, with shows, games, sports, guns, bells, bonfires, and illuminations, from one end of this continent to the other, from this time forward forever more."

Something tells me that President John Adams wouldn't have thought it amiss to observe the day with fireworks, cookouts, and baseball. He might have even wanted to sit in the bleachers with a hotdog. After all, "As much as I converse with Sages and Heroes, they have very little of my Love or Admiration." Sounds like he would have been much more comfortable out in the seats rather than a climate controlled suite.
Posted by Spiff at 2:32 PM

More of us need to think like our founding fathers. Not enough of us do.

I agree Night owl. Wonder what they would make of it all, if they were alive today...