Hunter keeps Texas in the hunt. 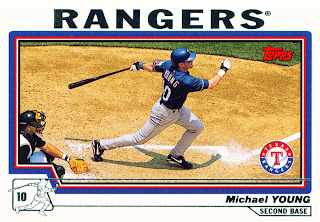 Tommy Hunter was undoubtedly a key component in the Rangers' win last night. In seven innings of work he allowed just one run. That lowered his ERA to 2.00. Tommy struck out six while only walking two to get his third win of the season. Sadly, I don't have a Topps Tommy Hunter card to post today.

Fortunately, Tommy wasn't the only bright spot for Texas as they topped Detroit 5-2. Michael Young went 3-for-4 with an RBI and two runs scored. One of his hits was a home run. That performance scores Michael today's card, number 41 in the 2004 Topps set.

Other notable offensive contributions included a two RBI double from Hank Blalock, a solo homer from Nelson Cruz, and a 2-for-3 night from Elvis Andrus. On the defensive side of things Josh Hamilton made a gravity-defying catch while playing right field, David Murphy picked up an outfield assist as he gunned down Curtis Granderson, and C.J. Wilson picked up his eleventh save as he struck out three of the four batters he faced.

Some good ball from the guys and they move up a game in the standings. A good night at the park.
Posted by Spiff at 4:02 AM