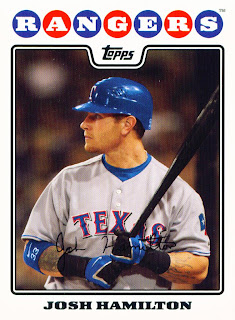 Josh is back! Last night was Josh Hamilton's first night back from the DL and his surgery. Even though the Rangers lost the game a first place to the Angels, Josh had a good night.

Hamilton, shown here on card number 439 of the 2008 Topps set, went 2-for-4 with a double and a run scored. He did strike out twice but left no men on base.

Sadly to effect did not rub off on the rest of the team. Kevin Millwood was touched up for more runs than he gave up in all of June. Not good. Hopefully the guys can come back and win tonight. If they can win tonight and tomorrow then they can still come out on top.
Posted by Spiff at 9:32 PM