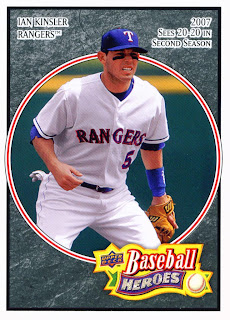 Texas won last night's game against Detroit 7-3 behind a hodge-podge of pitching. Vicente Padilla was scratched from the start due to the flu. In his place Doug Mathis was pressed into service. He lasted four innings and gave up all three of Detroit's runs. Jason Grilli then went two innings. Eddie Guardado, Darren O'Day, and Guillermo Moscoso all went one inning each. Some nice stop-gap pitching to take the series from the Tigers.

There was a downside though. In the sixth inning Ian Kinsler was trying unsuccessfully to beat out an infield hit. He strained a hamstring and is now day-to-day. That's going to hurt the Rangers I am afraid. Kinsler, seen here on card number 175 of the 2008 Upper Deck Heroes Charcoal set, had appeared in 96 out of 98 games so far in the season. Hopefully he can get back in action soon.

As a result of the Kinsler injury, Omar Vizquel got the start at second tonight. For insurance, the club called Joaquin Arias up from Triple A. They had to option Doug Mathis in order to do that.

Frank Francisco threw batting practice this afternoon. He says that he is over the flu and ready to pitch any time the Rangers are ready to have him back.
Posted by Spiff at 7:33 PM