The kase for Kinsler - Inge. 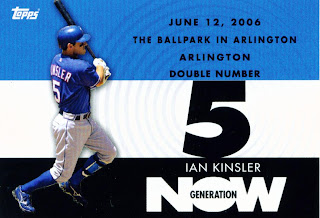 Ok, so it is understandable why Dustin Pedroia beat Ian Kinsler out of the second sacker spot for the All-Star game. I don't feel that it was the correct decision by the fans, but I can agree to disagree on that one. In the vote for the final spot though Ian lost out to Brandon Inge. Here are how the two compare.

As noted yesterday, Kinsler has played in 85 games this year and logged 756 innings in the field. Inge has appeared in 86 games while putting in 749.1 innings. Pretty close at first glance. Looking a little closer we find that Ian has 395 plate appearances while Inge has 345. Considering innings played and plate appearances, slight edge to Kinsler in durability.

At first glance Inge holds the edge in offense with a .268 average compared to Kinsler's .250. Not a very significant difference though when one considers that Kinsler is a leadoff man and Inge spends most of his time in the six hole. Inge also holds the edge in on base percentage with a .360 as compared to .327, that is significant. After that Brandon begins to lose ground. Inge has struck out 85 times as compared to Kinsler's 50 and has 35 walks to Ian's 39. He is seven hits behind Ian, 87-80 and has scored eleven times less 62-51. Some of the runs scored may be accounted for by batting order but Inge's lead in RBI (58-55) should be greater as well. Once on base, Kinsler has swiped 18 bags and only been caught twice while Inge has two steals and has been snagged himself four times. Ian has grounded into five double plays while Inge has kicked off eight twin killings. The power numbers also seem to favor Kinsler. He has 19 doubles, 2 triples, and 20 home runs. Brandon answers with 9 doubles, 1 triple, and 21 home runs. I'll trade one homer for 10 doubles and a triple any day of the week. In speed and power Kinsler holds a clear advantage over Inge. Offensive advantage: Kinsler.

Defense is a little harder to compare since Kinsler is a second baseman and Inge plays third. As such, the comparison may be flawed and the difference in positions must be remembered. Kinsler leads in errors with six to Inge's ten. Double plays are not important because middle infielders will always have more than a third baseman. Kinsler's .987 fielding percentage seems to be way ahead of Inge's .959 though. (By comparison, Michael Young is carrying a .968 in his first year at third.) I am not sure that range factor can fairly be compared. Based on errors and fielding percentage Kinsler beats Inge handily.

Kinsler comes out with a slight advantage in durability but seems to pull away in offense and defense. It seems to be pretty clear that the fans made a mistake on this one.
Posted by Spiff at 5:35 PM