The Hammer pounds the BoSox. 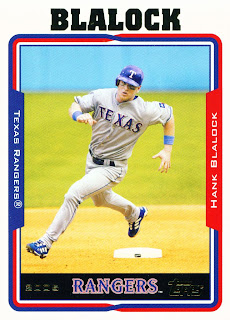 Hank Blalock has been on an offensive resurgence since taking over at first base from Chris Davis. Apparently getting to play every day has its advantages.

In the past two days Hank has gone to town on Red Sox pitching. For the two games he has gone a total of 4-for-7 and that against some decent pitchers. Those numbers put Hank's 2005 Topps card, number 20 in the set, up today.

Last night John Smoltz took the loss for the BoSox as Texas handed Kevin Millwood a 6-3 win. Hank went 2-for-4 with a run scored and two RBI. One of his hits was a double and he managed to avoid the strikeout all night.

Tonight the Rangers beat Josh Beckett 4-2 as Tommy Hunter snagged his second win of the season. The Hammer was present again, going 2-for-3 with two RBI. Once again he avoided the K.

That's a two decent performances in a row against some pretty good pitching. That's also the kind of production the Rangers are going to need out of Hank in order to compete to the end of the season.
Posted by Spiff at 9:50 PM

I am very happy for Hank. I always liked Blalock and wondered just how good he would be if it weren't for the injuries.

Loved the last two games by the way.