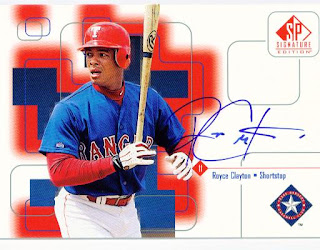 Ok, so we'll move on past Ian Kinsler and his failure to make the All-Star team. At least Nelson Cruz made it and turned in a respectable Home Run Derby performance. Hopefully that won't throw his swing off.

With not much else going on today in baseball I decided to take a look in the auto and game-used box. This 1999 SP Signature Edition card of Royce Clayton is what I came up with for today's card.

I like this SP set. The background colors match the uniforms and there is a nice space beside the player's picture for the autograph. At the same time the player's picture is a nice size as well. The autograph actually being on-card is icing on the cake. At first I couldn't quite tell what is going on in the picture. I finally settled on Royce preparing to flip his bat towards the dugout after taking a walk. That seems better than him looking back at the umpire in disbelief after being called out on strikes.

Hopefully this card is a good sign for the rest of the season. Royce played on two of Texas' three post-season teams in two and a partial seasons with the team. In his time with the Rangers he played in 333 games and turned in a .267 batting average. I really don't remember Royce in a Ranger's uniform since that was during my time away from the game and collecting. I do remember when he came up with the Giants and was big news.
Posted by Spiff at 3:40 PM