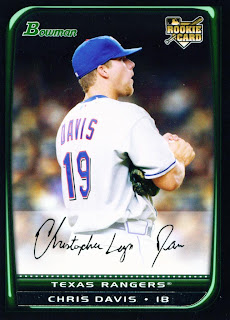 The Rangers won last night 5-2 over the Devil Rays. Scott Feldman picked up his seventh win of the season while Frank Francisco notched his 14th save. Feldman's ERA is now at 3.91 for the season. He's been looking pretty good. The team now heads out to the left coast for a series with Anaheim that starts tonight. Important series, the current tie for first will be broken one way or the other by the time the Rangers leave Haloville.

Chris Davis, shown here on card number BDP14 of the 2008 Bowman Draft Picks set, went 1-for-4 with one hit and one strikeout last night. The hit was an infield single that Chris managed with a headfirst slide. That left his average at .202. This morning the Rangers sent Chris to Triple A as they activated Josh Hamilton.

Sad to see Davis get demoted but it is probably for the best. He has been struggling to reach the Mendoza Line all season. If he hadn't gotten sent down he might well have broken the MLB record for most strikeouts in the first half of the season. Some time up in OKC will take the pressure off and allow him to work on hitting while maintaining his stellar defense. Hopefully this is just a temporary assignment and he'll be back to being Crush Davis shortly.

During Davis' absence Hank Blalock will likely get quite a bit of time in at first. His average is still under .300 but it is 39 points higher than Davis'. What concerns me is his defense. Davis is a Gold Glove worthy first sacker, Blalock is not by any stretch. Time to cross the fingers and hope for a quick recovery for Davis' bat so Texas can get his glove back.
Posted by Spiff at 3:40 PM