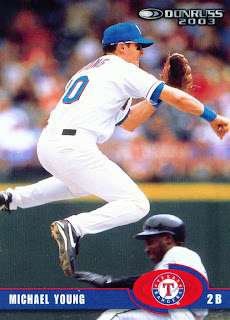 Derek Holland was a star of last night's game for Texas. I can't find a card of Holland though so I'll go with Michael Young for today's card, number 215 of the 2003 Donruss set. Michael isn't the second choice for star of the game, he is a co-star. The Old Man of the team and the new kid, sounds like a TV show. Let's start with Dutch.

I have seriously lost faith in Derek Holland over the course of the season. I just couldn't see what all the hype was about. All the talk about him being the future of the Rangers and I couldn't see it. Sure he was good for a couple of innings out of the pen but he always seemed to melt down for at least one inning when he started. Since he is billed as a starter that does have bearing on the situation. Still not completely sold on Dutch but if he pitched in the minors like he did last night I can see why folks were raving about him. Derek went 8.2 innings last night and gave up only two hits and one run. He walked one while whiffing ten. Talk about dominating. The Mariners didn't stand a chance offensively.

As it turned out, Seattle got pounded defensively as well. The Rangers' guns woke up and smashed seven runs across the plate. Five of those runs were the batters crossing after launching home runs. Michael Young was in the thick of the action as he went 3-for-4 and while sending two balls out of the park. Mike scored all three times he was on base and picked up two more RBI on the season. He also bounced his batting average up to .326. For being the old guy on the team he sure is moving.

Speaking of moving, the win put Texas to only three games behind the idle Angels. Anaheim opens a series with the Twins tonight so there is a possibility that the Rangers can pick up some ground if they can keep winning.

As far as any other moves, there weren't any for Texas. The Rangers made no trades as the trading deadline passed today. There had been some talk about a possible deal with Toronto for Roy Halladay but that illustrious personage declined to consider playing in a Rangers' uniform. Just as well I am thinking. Jon Daniels would have had to strip the farm system to get him and he would have been off goldbricking with the Evil Empire within two years. Best to dance with the one who brung ya as the saying goes.
Posted by Spiff at 5:01 PM

Love the blog. Wish I could keep up more with the Rangers, but living in NC leaves me few opportunities to check out the games. I've been frustrated a bit with the angels constant winning but take some comfort in Boston's inability to win consistently. The Rangers are only a 1.5 out of the Wild Card so hopefully the September call-ups will help put us over the top in either the West or the Wild Card.

Speaking of September call-ups I'm hoping that Neftali Feliz is to the Rangers (if they call him up) what David Price was to the Rays last year. A fresh arm with potential who adds an extra bit of confidence to the team and helps solidify the rotation a bit more.

Well they did call up Feliz. Hoping you are right about his impact.

Thanks for the comment and I am glad you enjoy the blog.