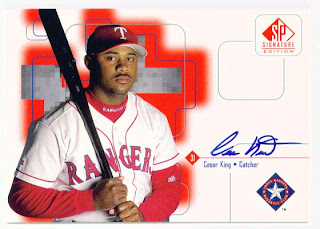 Last night was ugly. The Tigers manhandled Scott Feldman. Scooter suffered his worst start of the season as he went only 2.1 innings and gave up six earned runs. The bullpen couldn't stop the bleeding either. The final score was 13-5 Detroit. Ouch!

The trading deadline is also looming. Lots of teams are still in contention and looking to make a deal. There are rumors but Jon Daniels is saying that he isn't sure he can swing a deal for the Rangers.

Cesar King is one player who probably wished for a trade when he was in the Rangers' farm system. King, seen here on card #CK1 of the 1999 SP Signature Edition set, played minor league ball for Texas from 1996 to 2000. That was right in the middle of Ivan Rodriguez's heyday. Effectively blocked by Pudge, King never saw the Bigs. He eventually got away from Pudge's shadow and played a few years for Philadelphia, Kansas City, and Cincinnati. By then it was too late though, his best seasons were behind him. Just as he got the chance to make the big leap, his offense and defense dipped. By age 24 he was done.
Posted by Spiff at 8:02 PM

I bought several of these boxes and ended up with about 3 of these cards...boy was I hoping he would hit it big.