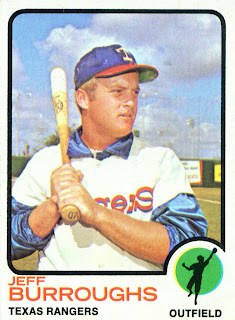 So the Rangers bought a pitcher from the Yankees today. A relatively unknown reliever named Edwar Ramirez. Looks like a wait and see situation. Jarrod Saltalamacchia missed today's Cactus League game because of soreness in his shoulder. That man is worrying me a bit and I hope it is unfounded. Other than that all is quiet from Arizona.

Looking at Jeff Burroughs today on card number 489 of the 1973 Topps set. Jeff's got the windbreaker under the jersey look going. I have to admit that I have never understood or liked that look. It appears especially questionable when the jacket sleeves are pulled up like they are here. The back of the card warns us not to judge Jeff just by his clothes. After all, we are informed, he was a member of the 1966 World Champion Pony League team. Gotta be something there then.

In 1973 there was something there for Jeff Burroughs. It was his fourth season in the Majors and it was his breakout year. Jeff was the Rangers first-string right fielder. He played in 151 games and had 605 plate appearances. Both numbers were career highs at that point for Burroughs and he took advantage of the opportunity.

Jeff put up his best batting average to date with a .279 mark. His slugging percentage was .487 - best of Texas' starting nine that year. He hammered 30 home runs and knocked in 85 runs (leading the team in both categories) while scoring 71 runs himself (tying for the top mark). He also managed 17 doubles. He walked 67 times while whiffing only 88, not bad for a power hitter.

In the field Jeff played 1,242 innings and handled 325 chances. He muffed the play only 8 times for a .975 fielding percentage. The fielding percentage isn't too bad considering that his range factor per nine innings was 2.14 compared to a league average of 2.02.

Even though the Rangers struggled in '73 Burroughs did not. In fact, he was on the verge of even greater achievements.
Posted by Spiff at 6:16 PM

I never understood the jacket under the jersey thing myself. I think most moms taught us to wear our jackets over our shirts.