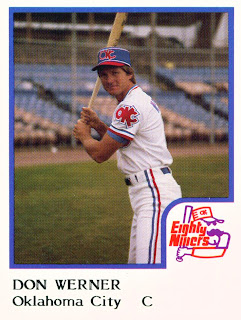 Yes, this is the same Don Werner. By the time Don appeared on this 1986 ProCards card his time with the Rangers was behind him. He had last appeared in the Bigs in 1982 for Texas.

The next four years were spent toiling in the minors, trying to get back up to The Show. The Rangers had released Don in October of 1983 and he signed with the Royals in December of that year. In March of 1984 KC traded Werner to the Cubs.

Don spent the 1984 season in the Cubs system at Triple A. Somehow he made his way to the Tigers and started the 1985 season at Double A. Detroit promoted him to Triple A before moving him back to Texas. That was the start of Don's stint with the Eighty Niners.

In a full season in 1986 Don appeared in 66 games for OKC. He was one of five catchers who played for the Eighty Niners that year. Interestingly all five had been, or would be, major leaguers.

In his 66 games in 1986 Don posted a .285 batting average with a .441 slugging percentage. He managed 53 hits in 186 at bats. Six of those hits were home runs, five were doubles and three were triples. There is no record of how many RBI Don pushed across for the Niners. Not bad numbers but not good enough to get the call that year. In fact Don wouldn't get the call. His time in the Majors was behind him. There were still games to be played though and some interesting times in the future.
Posted by Spiff at 9:24 PM