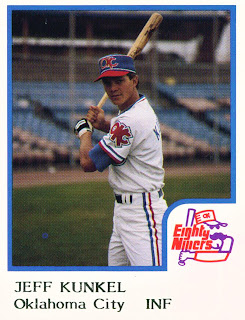 It seems like I am getting in a rut on Fridays with minor league cards the last two weeks and now today. Going to be nice to see the regular season start and at least have games to talk about. Not that I dislike the minor league angle but I would rather have the season rolling and have some variety.

Jeff Kunkel's position designation on his 1986 ProCard is about as accurate as one can get. To be totally accurate though it would need to read "E" for everywhere. Jeff was a utility player in the truest since of the word. A quick look at his MLB career shows that he played every position except catcher. That includes DH and pitcher.

Jeff was the Rangers' first round pick in the 1983 draft and the team held high hopes for him. In fact, by the time the 1986 season rolled around, Jeff had already made his Major League debut. In 1986 though he would appear in only eight games for the Rangers, the rest of his season would be with Oklahoma City.

Baseball-Reference has no fielding records for Jeff while he was with OKC in 1986 other than to indicate that he played shortstop. His offensive numbers are there but have some pretty big gaps. In 111 games he had 409 at bats and managed 100 hits. 16 of those hits were doubles, four were triples, and 11 were home runs. All that translated into a .244 batting average and a .384 slugging percentage. Most of the rest of the numbers are missing. Makes it kind of hard to say what sort of season Jeff had for the Eighty-Niners.
Posted by Spiff at 10:14 AM

Kunkel really was a legend in my opinion. He was such a talented and versatile player.