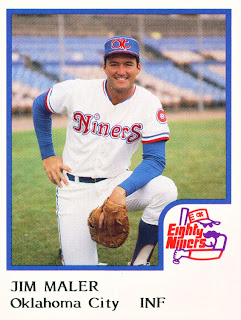 Jim Maler is listed as an infielder on his 1986 ProCards Eighty Niners card. That's a little misleading. Jim played in the infield, he didn't play the whole thing. As his glove indicates, he was a first baseman. I can't find a record of him playing anywhere else in his nine year career other than a few appearances as a designated hitter.

There is also no record of how the Rangers got him but he played the entire 1985 and 1986 seasons for Oklahoma City. Jim's records are sketchy but there seems to have been a decline that last year.

1986 was the Jim Maler's last season in professional baseball. He had suffered at least two major knee injuries in his career and they finally caught up with him. He did have something to smile about - he had been to the big show.
Posted by Spiff at 7:03 PM