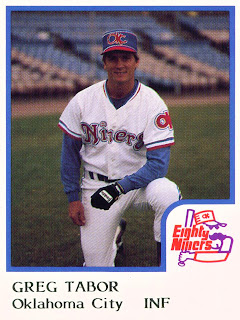 Taking a look at Greg Tabor today on his 1986 ProCards Eighty Niners card. Greg has the batting glove look going, one of only two players in the entire set to appear with a batting glove on. The other is Jeff Kunkel and we haven't gotten to him yet.

Greg had been drafted in the first round of the 1981 draft by the Rangers. He started his pro career in the same year with the GCL Rangers in Rookie ball. Just nine games later he was bumped up to Single A. About three quarters of the way through the 1982 season he was promoted up to Double A Tulsa.

Greg kind of stalled with the Tulsa Drillers, playing the entire 1983 and 1984 seasons with them. It was upward and onward in 1985 though as he started the season with OKC in Triple A ball. He would play there all season and in 1986 as well.

In 1986 Greg mainly played second base. I was unable to find any fielding stats for him for that season. On the offense he posted a .284 batting average with a .362 slugging percentage. Tabor stayed in OKC the entire 1986 season, any Major League call-up would have to wait.
Posted by Spiff at 5:55 PM