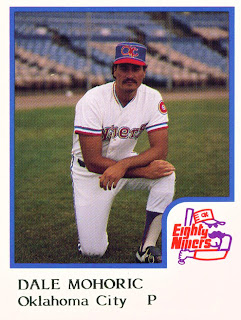 I know, we just had a minor league card on Friday. So what's up with another one just a couple of days later? Well, with the only big news out of Rangers camp being that Scott Feldman will start opening day I was wondering what to post. My wife suggested that I start a Minor League Monday to go along with Topps Tuesday, Wantlist Wednesday, and Senators Saturday. Seemed like a good idea. With that in mind I will try to keep the minor league cards to Monday.

Although not the first minor league card Dale Morhorcic will be the first on an official Minor League Monday. Dale's not too excited though, by the time he appeared on this 1986 ProCards Eighty-Niners card he was a minor league veteran. Of course his lack of excitement could also be attributed to the fact that ProCards couldn't get his last name spelled right.

Dale started his career in pro ball with an unaffiliated team in Victoria, British Columbia in 1978. At the end of that season the Mussels sold him to the Blue Jays who assigned him to Single A ball. In January of 1980 the Jays released him. In April of that year the Pirates picked him up and he was back in Single A ball. Four years later he had made it to Triple A just in time to be granted free agency.

The Rangers signed him in May of 1985. He played one season for OKC before becoming a free agent again that September. Texas waited until February of 1986 before re-signing him. 16 games later he got the call and hopped the OKC-Arlington shuttle. After eight plus seasons in the minors, Dale Mohorcic was off to the Big Show.
Posted by Spiff at 9:23 PM

Mohorcic wore #34. He was the last before Nolan Ryan.