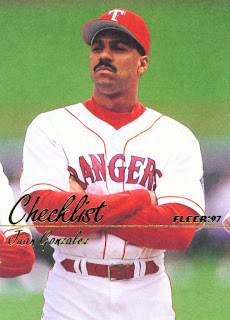 So, Colby Lewis looked pretty sharp in his outing against the Diamondbacks yesterday. Two runs in 7.1 innings. Not too bad. Keeps the Rangers in a position to win when the starter does that. In other news, the team is still pondering the need for a back-up right-handed hitting first baseman. Matt Brown is the leading candidate at this point. Ian Kinsler is most likely going to start the 2010 season on the DL as a result of his sprained ankle.

Juan Gonzalez started the 1997 season on the DL as well. He was still featured on card 747 in the 1997 Fleer set, a Rangers team checklist. This is another set design by Fleer that I like. Minimal design and no gloss so good for autographs. Nice looking set and one that I am only a couple of cards away from completing. Here is what I need:

Only two cards left. If you have either or both and are willing to part with them (or have any cards previously listed on wantlist posts) then shoot me an email. I am sure we can work out a trade.
Posted by Spiff at 10:26 AM