Franco in from Florida. 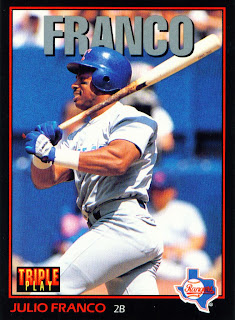 Got a nice stack of cards today from reader Rob in Florida. Rob had contacted me a short time back to tell me that he could hit several cards off my wantlist. We agreed to a trade and Rob delivered.

The cards arrived in record time and did knock off several wants. In fact, at least two team sets were completed thanks to Rob's generosity. One set was the 1993 Triple Play set. The last card I needed was number 148, Julio Franco. As you can see, that card was included in the package.

Thanks a bunch Rob. Hopefully the cards I sent in return will fill a few of your wants as well. For everyone else; if Rob contacts you wanting to work a trade you would be well advised to agree. A first class Floridian to be sure.
Posted by Spiff at 1:10 PM

Thanks for the kind words. Your cards arrived today and will certainly go towards completing some sets. Thanks again!