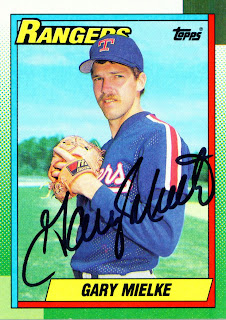 Nolan Ryan says that he thinks the Rangers can win 92 games this season. Ron Washington says that's not a problem. Haven't heard if Ron thinks that Josh Hamilton's 96 wins is a doable mark or not. 92 would be just fine with me. That would very possibly put them in the post-season. I must admit that I would feel a little more confidant of Nolan's prediction if he was still on the mound for Texas.

Gary Meilke was no Nolan Ryan but he was also a pitcher for the Rangers. He is also a great through the mail signer. I sent this 1990 Topps card to Mr. Meilke on February 24th of this year. It came back signed today. Thanks a bunch Gary!
Posted by Spiff at 5:20 PM

Its so cool that Gary Meilke sent you back the autographed Topps card! I think that guy is great.