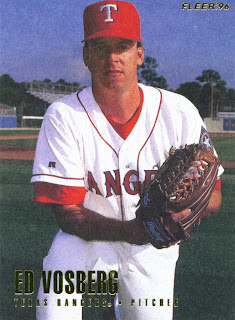 Well, after a horrific design in 1995 Fleer came back the following year with one of it's better ones. The 1996 cards, demonstrated here by Ed Vosberg on card number U91, were a marked improvement over the preceding year. I generally like the border-less look and 1996 Fleer is no exception. It also helps that the cards are not glossy and so are ideal for autographs.

I'm still quite a ways from completing the Rangers team set from 1996 Fleer though. Here are the cards I need:

Still quite a number of cards left. If you can knock out any from this list and are willing to part with them (or have any cards previously listed on wantlist posts) then shoot me an email. I am sure we can work out a trade.

Speaking of trades. I have noticed in my collecting that there are some teams (e.g. Yankees, Dodgers, White Sox, Red Sox, etc.) that seem to be very popular. So much so that I can hardly build up a decent stack of their cards before a trade proposal comes in. There are other teams however where the exact opposite is true. Here are the slowest-moving teams in my trade box:
Expos/Nationals (mostly Expos but they are all mixed in)
Mariners
Giants
Rockies
Cubs
Orioles
Astros
Braves
Tigers
Some of these teams are to be expected while others are a surprise. It doesn't really shock me to see the Expos in the mix. The Cubs and Braves are a bit more unexpected. If you are interested in doing a team lot trade for any of them shoot me an email.
Posted by Spiff at 3:28 PM

I always kinda like the 1995 score design. It made you know what division each team was in

I always kinda like the 1995 score design. It made you know what division each team was in

I know PLENTY of Orioles collectors. There are about 6 card bloggers who are Orioles fans. Besides Mets and Red Sox, it's the most difficult team for me to keep in stock.