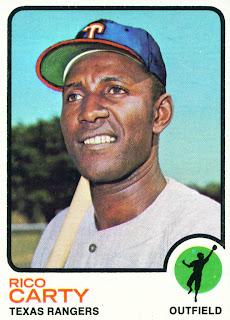 So the Rangers traded for catcher Matt Treanor yesterday. I guess that Jarrod Saltalamacchia is still somewhat of a question mark for the start of the season. I was worried that this might be the case.

Rico Carty looks a little worried on card number 435 of the 1973 Topps set. Either that or the camera man is making fun of his airbrushed cap and Rico isn't quite sure what to make of it.

Carty's cap had to be airbrushed on this card because he was a new arrival in Texas. In October, 1972 the Rangers had traded Jim Panther to the Braves for "Beeg Mon".

Carty would play in 53 games in left field for the Rangers in 1973. He would handle 90 chances in 411 innings without an error.

Offensively he would post a .232 batting average in 347 plate appearances in 86 total games. In those appearances he would manage 71 hits and 36 walks while striking out 39 times. That translates to a .311 on base percentage. Rico also hammered in 33 runs while scoring 25 times himself.

Those numbers made sense to the Rangers. Well dollars and cents that is. On August 13, 1973 they sold Rico to the Cubs thus ending his tenure in Texas. On September 11, 1973 the Cubs sold him to the A's. In December the A's released him. Rico was a traveling man in1973.
Posted by Spiff at 8:39 PM

That has to be in the top 5 of all time worse airbrush attempts.