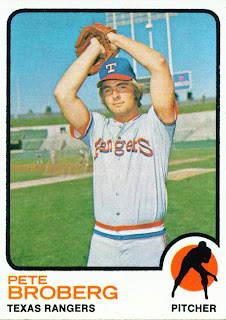 Not much coming out of Spring Training. The Rangers have started their intra-squad scrimmages and are on track to be ready for the Cactus League.

With not much interesting happening with the Rangers now it's time for trip back to 1973. Today we have Pete Broberg on his 1973 Topps card, number 162 in the set.

Legend has it that Ted Williams once said that Pete Broberg would never pitch in the minors. Well, Ted knew hitting and he knew baseball but he didn't know Pete Broberg.

He also showed up in 22 games for the Rangers, 20 of them as a starter. Unfortunately for Pete his Major League numbers were not as acceptable as his minor league ones. In his 22 appearances he posted a 5-9 record and a 5.61 ERA. In 118.2 innings pitched he struck out 57, quite the drop in rate from Spokane.

Those numbers didn't do Pete any favors. Jim Bibby was unquestionably the ace of the staff, Pete was probably the fourth or fifth starter.

A quick note, I have added a search feature at the bottom of the page in case you are needing to look for a specific player or year or anything else. Please let me know if you find it useful.
Posted by Spiff at 9:21 PM