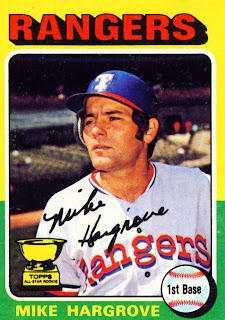 Topps recognized Mike Hargrove's outstanding 1974 season with an All-Star Rookie Cup on his 1975 Topps card, number 106 in the set. Heading into the 1975 season the Rangers were hoping that Mike would be able to avoid the sophomore jinx.

Jim Spencer pushed Hargrove out of position in 1975 and he would spend the majority of his season in left field, 811.1 innings there as opposed to 319.1 at first. Mike struggled defensively in left field with seven errors. That resulted in a .964 fielding percentage, well below the league average .977. He was a bit closer to average at first base where he logged a .984 fielding percentage, just six points under the league average.

At the plate Hargrove made 609 plate appearances and managed a .303 batting average. That was twenty points lower than the previous season but his on-base percentage remained exactly the same at .395. The on-base percentage was due in large part to his 79 walks. Mike was also developing some power with the bat. He hit 22 doubles, two triples, and 11 home runs. The triples were down but the other two extra base hit totals were up from 1974.

At the end of the 1975 season there were still areas for Mike Hargrove to improve in but it was safe to say that he had avoided the sophomore jinx. His batting average had led the team and he had been named to the All-Star team. If he could improve on his defense and keep the bat performance steady he wouldn't have to worry about anyone pushing him out of position in 1976.
Posted by Spiff at 6:07 PM

I think that's my favorite Ranger card from the whole set.